We were supposed to have a plumbing inspection on Wednesday, so Paul worked from home, but it turned out the plumber was sick so that has been postponed till next week. That and getting the upstairs bedroom repaired will be our next major time-sinks, though hopefully most of the post-roof repairs will be covered by insurance. Since we were all here, we had lunch with Adam and spent most of the afternoon inside, though I did sneak out to do a couple of Groudon raids.

We all did work on our computers while watching Annihilation, which I thought was great, with the caveat that I never read the book and only vaguely remember there were people angry about the whitewashing of a main character; I was just thrilled to see a movie in which all the female leads are in scientific, military, or medical jobs and where pretty much every conversation passes the Bechdel Test. Plus I loved seeing Portman, Rodriguez, and Thompson working together.

We had veggie shawarma for dinner before watching The Masked Singer, which remains insanely entertaining, and the Supergirl we missed on Sunday, which I did not love -- Alex's storyline in particular. The New York Historical Society did not allow photos in Harry Potter: A History of Magic, but I took the first one from the stairwell outside because you can see most of Jim Kay's Snape painting, and the book covers and costumes from Cursed Child were outside the exhibit: 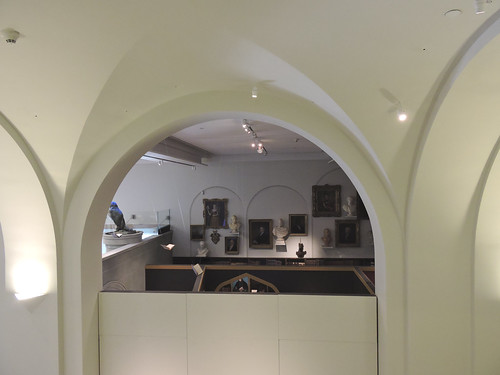