Adam goes back to College Park on Saturday for his final semester, so I am having a quiet week hanging out with him as he attempts to do work for NASA when just about every resource he needs is impacted by the shutdown. After lunch we watched Downsizing, which was not at all the comedy advertised after the first half hour; for a while it was really good, an allegorical drama about privilege, cultural arrogance, and impending environmental catastrophe, but then it kind of went off the rails with a badly written romance and an incredibly bizarre apocalypse scenario.

Paul made Ethiopian food for dinner, after which we watched The Orville (very original Star Trek even where bad science is concerned) and the women's short program at the US Figure Skating Championships (I'm sad Mirai and Gracie aren't there). Here are a few photos from last weekend from the National September 11 Memorial & Museum, which do not begin to do justice to the experience of being there. No photos are allowed in the In Memoriam gallery, nor in the enormous exhibit with the timeline of and artifacts from the attacks. May be triggering: 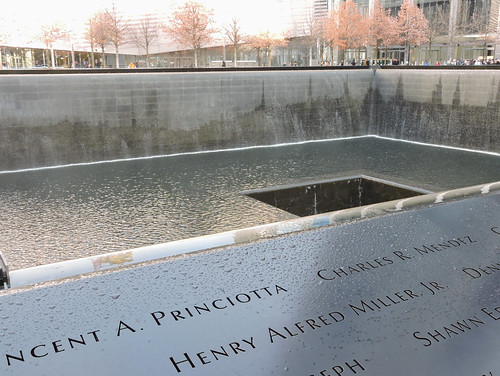