Paul worked from home because we had a plumber coming to look at the upstairs bathroom (verdict: sink fixture needs to be replaced, so we need to go pick one out). Since the schools were closing early and most of the county recreation facilities were shut for impending snow, this was just as well. Since First Man is now streaming, we watched that while working (verdict: very well acted, stunningly filmed, fantastic score, some weird, depressing script choices). And I got the laundry folded.

It was snowing quite hard by 5 p.m., but a friend who was in the neighborhood for a Kyogre raid offered to give me a ride to the first local Palkia raid at a nearby church, so I gratefully accepted since I did not want to drive with it coming down so hard. We watched The Flash, in which Nora still does not make any sense, then caught up on the Supergirl we missed, in which Nia and Kara are awesome and the show finally replicates Smallville's growing-up-super is like growing-up-gay parallel. Snow pics: 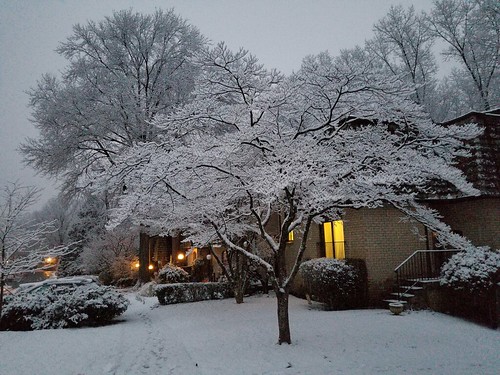