The weather on Wednesday was not quite as beautiful as it was on Tuesday, though it started nearly as warm and held off raining until after everything I wanted to do outdoors. Denise came down from Baltimore for a Deoxys EX raid, before which we had lunch at Mirch Masala in the mall and after which we came back to my house and watched 5/8 of the so-soapy-it's-kind-of-magnificent Tidelands while trying to keep my cats entertained.

Paul's and my evening TV was The Masked Singer which had good songs across the board tonight, followed by the RDJ-Maggie Gyllenhaal episode of Finding Your Roots, which I only just discovered is on Amazon Prime. Here are some photos from my past couple of days of being a slacker, including mall Chinese New Year and winter decorations, a fox in my neighborhood probably trying to steal my neighbor's cat food, and my cats being indulged: 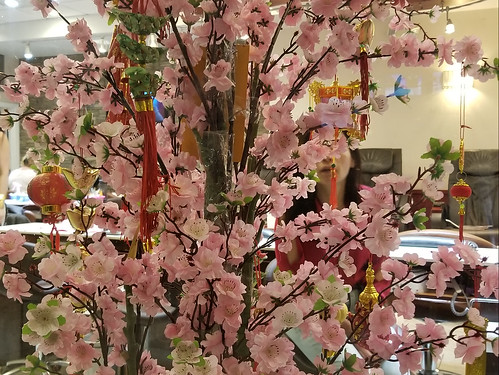