My neighbor Rose took me to the movies on Friday, something we've had plans to do since before Aquaman opened though we never got to that one together. We saw Isn't It Romantic, which is very fun -- a rom-com that mocks the more terrible tropes of rom-coms, though I'm not sure that you get to have a stereotyped gay character and claim you're only doing it to scoff at the stereotype, though the Star Is Born remake has pretty much that character so maybe it still does need to be exposed for what it is. Rebel Wilson is delightful and though there's not enough Liam Hemsworth, he is shirtless quite a bit.

Rose had to go teach a fitness class in the afternoon, so I went to the park to take a walk since the weather was ridiculously nice -- in the 60s and sunny -- then came back here for a late lunch and some chores that had to get done. We had dinner at my parents' house, came home for Blindspot, then I made Paul watch The Last Song because I'd never seen it and needed more Liam Hemsworth. It's a lot more tolerable than most Nicholas Sparks adaptations. Here is some art from the Torpedo Factory in Alexandria, including Christine Cardellino's funny-distressing presidential The Fisherman and His Wife: 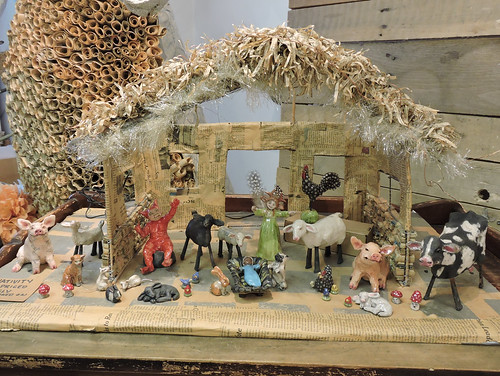