We woke on Tuesday to warnings about snow starting by midnight, which got more dramatic over the course of the day. One by one, closings were announced for Wednesday -- our local schools, the rec centers, the University of Maryland, Paul's office. So I reluctantly postponed my Wednesday lunch plans with the mother of one of Adam's best friends and went out to get things done that I won't be able to do if I can't drive out of the neighborhood, including taking a walk in the park, where I ran into Pokemon friends.

We had leftover Thai food for dinner before The Gifted, which has been great this season, partly because it's a very good cast but partly because it's such a short season that the storylines don't drag and the CW could take a lesson from that for its superhero shows. Then we watched Miracle Workers, in which God a.k.a. Steve Buscemi gives Bill Maher what he deserves and ridiculous problems afflict Daniel Radcliffe. From Hanover Shoe Farms on Sunday with my in-laws, here are some of the mares and foals we got to meet: 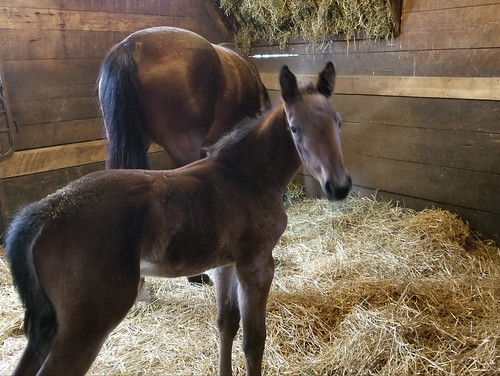