Our car was in for what was supposed to be routine maintenance on Wednesday, so Paul worked from one so one of us would not be without a vehicle all day. I say "supposed to be" because the last time it went in for that, it came home making a strange noise whenever we turned left sharply, which he thought was because they had tightened something and it didn't seem to be causing any trouble otherwise. Turns out the car had a broken axle, which of course at this late date we couldn't prove happened the last time it was in the shop. So $500 later, I have learned that the next time the car comes home with the slightest strange thing going on, we should take it back immediately!

It was otherwise an uneventful day. We had lunch together, I did get out to the park to walk for a bit. It was Pokemon's anniversary but I still have not found a single shiny Rattata or Pidgey. After dinner we watched the season finale of The Masked Singer, which was insane, enjoyable, and reasonably satisfying apart from the fact that the person who came in third should have won (they wanted a redemption arc, not a "this person has always been awesome" storyline). Then we watched the pilot of Whiskey Cavalier, which I found predictable and unexciting -- felt like it was from a decade ago, especially the female characters. Since we're supposed to get snow Friday, some Hillwood orchids: 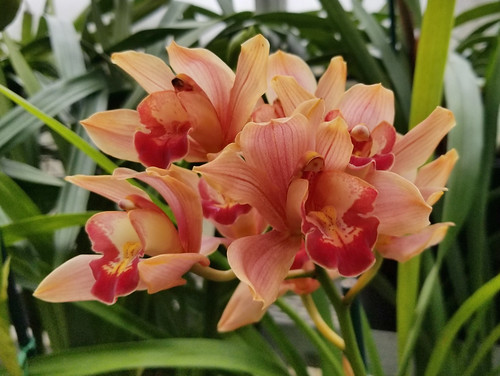