Friday was just as beautiful as Thursday -- we had thunderstorms forecast and the weather on my phone even reported that it was raining a couple of times, but I never felt one drop. Instead it was partially overcast and in the 70s, with the plum trees blooming in Cabin John Park. I had to make a couple of stops like the UPS store and the Corner Bakery, so since I was out in that direction, I got to enjoy the park and do a couple of lunchtime Pokemon raids: 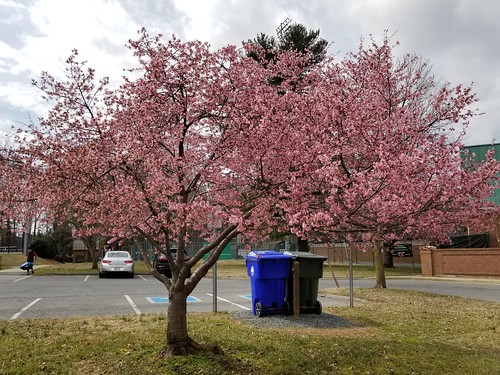 My cat Effie just tried to climb up an open shelving unit for the second time this week and broke a bunch of stuff in my room, so the rest of the summary, quickly: we had dinner with my parents, came home to watch Blindspot, started watching Samantha Bee until she started making excuses for Ilhan Omar's anti-Semitism at which point we turned her off, watched Dennis DeYoung in concert on PBS, and we're still waiting to hear when Adam might come for spring break.
Collapse