It was colder on Sunday than Saturday, but sunny and beautiful, so after a big Irish breakfast of soda bread, eggs, veggie sausage, and veggie "blood" pudding, we went with Adam to Huntley Meadows. We never made it there last year, so we hadn't seen all the new dams the beavers had built and the new patters in the wetlands. We didn't see beavers, just their work, though we did see geese, ducks, coots, cormorants, tadpoles, frogs, crows, an osprey, and a wide variety of turtles, plus lots of trees with buds. 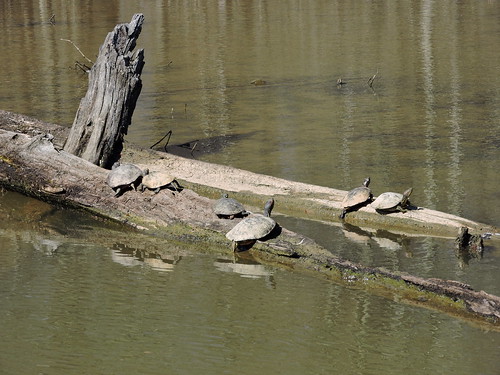 My parents came over during the NCAA tournament selection show -- Go Terps, number 6 seed! -- to have pizza and to see Adam, who then went to hang out with a friend who's also at home. We watched this week's Supergirl (not my favorite Lex but not my least favorite either; not a good Kara or Alex episode sadly), Billions (hahahaha you people all deserve each other, especially Axe and Taylor), and Madam Secretary (if only things actually worked like that, though I'm fine with this show pretending that they do).
Collapse