Paul worked half a day on Friday so he could spend more time with Adam before the latter goes back for his last semester of college when spring break ends Sunday night. So we all had lunch together, then we went to Sugarloaf Mountain to hike to the top. This started out very nicely in cool, overcast weather, and it was only a bit misty when we reached the summit, but it started to rain as we started down the Giant Staircase of Doom and was pouring, cold rain mixed with sleet and snow, by the time we reached the car.

It rained the whole way home, then stopped just as we arrived, and the sun came out and briefly gave us a rainbow. We had dinner with my parents, who had an early birthday cake for Paul. Adam had plans with several high school friends who were also in the area; meanwhile, Paul and I watched Blindspot, then he watched some of the NCAA tournament while I participated in the Vudu Viewing Party for Spider-Man: Into the Spider-Verse, which was fun though I did not win any autographed posters. From the mountain and after the rain: 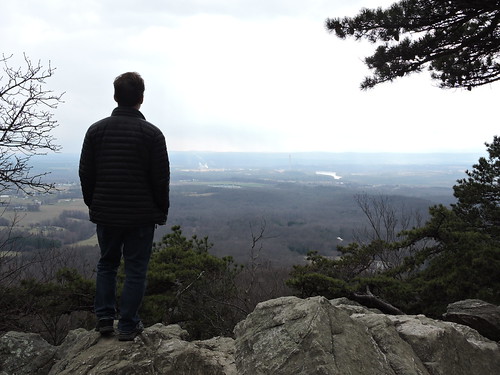