Paul, Adam, and I spent a beautiful Saturday in the Brandywine Valley, where it was cool but sunny and surprisingly not crowded even though it was the last weekend of Longwood Gardens' orchid extravaganza. We went first to Winterthur, where we skipped the house tour in favor of lunch in the very good restaurant (salad bar with lots of excellent veggie and vegan options) and a walk through the extensive gardens -- the March Bank is only just starting to look fully blue, but there are lots of crocuses and snowdrops, some lenten roses and daffodils, and trees just starting to show buds.

From there we headed to Longwood, arriving just as Pokemon Community Day started so I went slowly walking out to the meadow catching Treeckos. There's not much blooming outside, just crocuses among the emerging tulip leaves, but it was a nice day to visit the tree houses, and the orchids in the conservatory are spectacular, plus there are daffodils, tulips, lilies and hundreds of other flowers. I suppose it's just as well we missed seeing the Maryland men getting knocked out of the NCAA tournament -- the women won! When we got home, we had sandwiches and watched Free Solo which Adam had not seen. 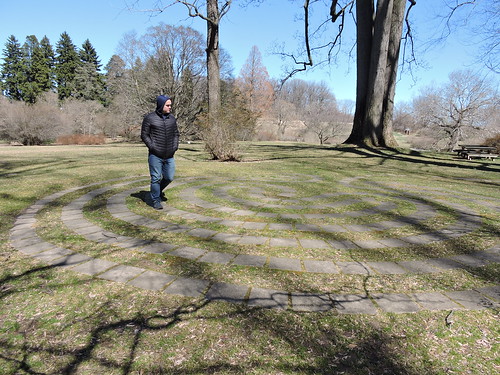