Most of my Monday involved laundry, dyeing my hair, and cleaning up from spring break, plus a project from an online group I'm in. It was a nice day until drizzle arrived in the afternoon, though it remained reasonably warm. I had plans to meet Angela and Carrie for dinner and wound up bringing Paul with me since he was bummed he never got his Silver Diner birthday coupon and that's where the gal's group ended up deciding to meet.

We got home for most of the Maryland women's game against UCLA, but the Terps lost in the final minute and that was so sad that I made Paul watch Closer, which I've meant to see for years but heard was depressing and required the right mood. It's free on Amazon Prime and well acted but definitely depressing and cynical. Now I'm watching infotainers try to deal with the Mueller Report, which is worse. From Longwood Gardens' Orchid Extravaganza: 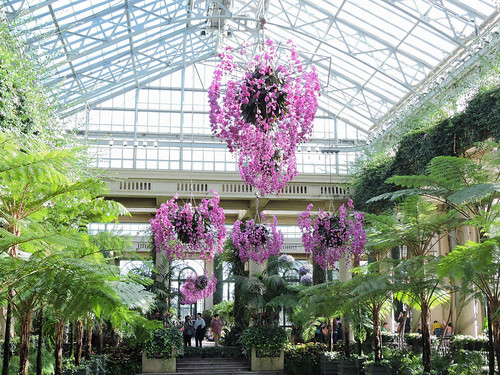