Paul and I met Cheryl at EagleBank Arena to see Marvel Universe Live: Age of Heroes, which is glorious fun as long as you aren't picky about things like acting and realistic special effects -- Spider-Man hangs from wires instead of webs and the dragon looks suspiciously like it might be a film projection, plus Captain America and Black Widow appear to have been hired for their motorcycle skills more than their oratory skills, but pretty much every pre-Infinity War superhero and a lot of villains are in it, with Loki leading the bad guys and dragging the Avengers and Guardians of the Galaxy all the way back to Asgard! Black Panther got the most applause, but there were kids dressed as every comic hero imaginable, including Wonder Woman, Superman, and some others not even from the MCU. After the show, we met a friend from DC for dinner at the Bollywood Bistro in Fairfax Old Town, then got home in time for the end of the Virginia-Purdue game! 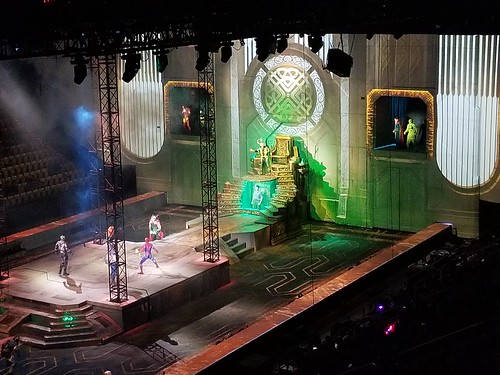