The weather on Saturday, when we were mostly indoors at Marvel Live, was 75 degrees and sunny. The weather on Sunday morning was rainy and we had plans to go to Baltimore to see some art exhibits, but even having dropped 20 degrees, we decided by lunchtime that it was too nice a day not to go see some cherry blossoms in case the cold snap expected Monday made them disappear prematurely. So after lunch, we went to the National Cathedral, which in addition to beautiful stained glass inside has a beautiful garden outside with daffodils, aconite, squill, forsythia, and several types of cherry blossoms. We walked through the garden and the woods path, then went inside to see the windows and listen to the rehearsal for the evensong service that began just as we were leaving from a trip to the blissfully uncrowded upper level observation deck.

On the way back driving up River Road, we went to Kenwood, the Bethesda neighborhood with more than a thousand cherry blossom trees lining its streets. There were more people there than there had been at the cathedral before the service, especially families with children, plus at least two lemonade stands run by local children and several photographers with very expensive lenses. We walked around for an hour, then stopped at Giant on the way home, eating dinner late because we were watching the Michigan State-Duke game which the Spartans thankfully won! It was a busy TV Sunday, with Supergirl (season is dragging now), Billions (I'm still pissed off about the chicken thing), and Madam Secretary (family story working better than insanely quick turnaround on climate refugees). Four photos from National Cathedral and four from Kenwood: 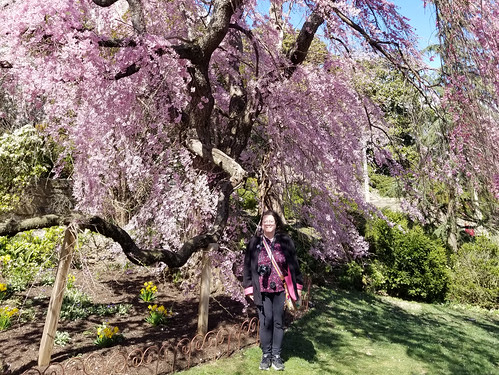