I had a pretty fun Wednesday after a morning of chores. My friend Mel invited me to an EX raid, so I went with a big crowd to the Shriver Aquatic Center for that, then met a couple of other people at Congressional Fountain for a Giratina raid after a stop at Bagel City for lunch. From there I stopped at Five Below, which I had heard had tiny little shelves (in white and black), and wound up at Cabin John Park, where I walked around by the blooming trees and watched a bit of the Georgetown-GMU baseball game at Povich Field.

We had hikers' curry-in-a-bag for dinner to see if we want to take it traveling since it's just-add-boiling-water, so easy vegetarian lentils and potatoes. Then we watched Wimbledon since I got a Vudu copy cheap since I own the DVD, waiting for the reruns of the first two episodes of What We Do in the Shadows since we missed it when it first aired. (Pretty good, better women's roles, but I miss Taika onscreen.) From Kenwood in Bethesda last weekend, some of the many cherry blossom trees with backdrop of million dollar houses: 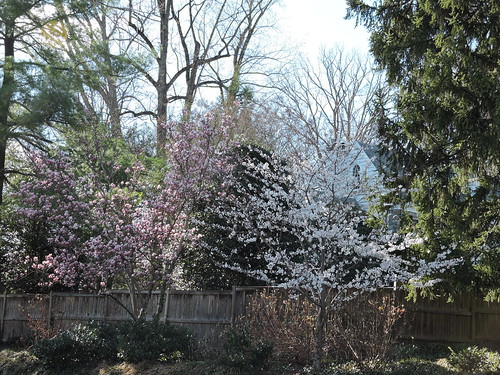