My neighbor Rose and I have had plans to see Captain Marvel together since the week it opened, but she has been crazy busy, so on Friday we finally managed to get there and I was so happy to see it again! I think I liked it even better this time, in a theater with maybe 18 people total; it didn't have the same energy as the packed opening weekend crowd, but it was mostly women plus a couple of dads with daughters and everyone was watching with great intensity and delight. I know it's unlikely but I really hope they find a way to keep Annette Bening in the MCU.

My parents caught the stomach flu at a Bat Mitzvah out of town last weekend, so Paul and I did not get to have dinner with them. Instead we ate here, saw this week's Blindspot, and then watched On the Basis of Sex, which doesn't really seem like an unconventional enough movie for someone as unconventional as the notorious RBG; the performances are good, but the screenplay, though interesting and relevant, is somewhat didactic. Before we move into late spring and the daffodils give way to tulips and azaleas, here are some photos of my neighborhood in early bloom: 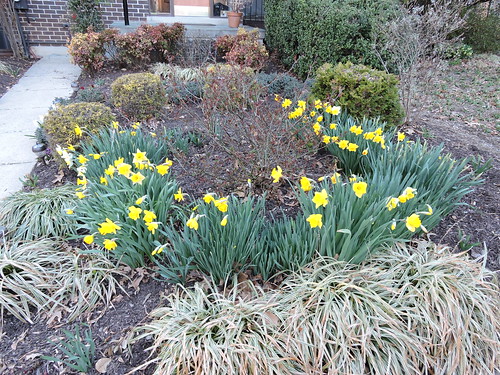