Long, long, long day that started at 5 a.m. for me when Daisy stopped smushing me to throw up all over the bedroom floor. I never fell back asleep; eventually I got up, showered, and tried to figure out incomprehensible GPS directions to a parking lot that does not technically exist on Google Maps. Eventually I managed to park, only to walk into the wrong court building and wait in line for security for 15 minutes before being told I had the wrong summons for that building. So I went across the street to the right building along with about 600 other prospective jurors (well, based on the gaps in the numbers being called, maybe only 500) to check in, see the movie explaining jury duty, and hear an explanation (with sign language) of our responsibilities.

Then they called us -- way more than when I last had jury duty 20 years ago -- in groups of about 80, first to pick up our parking validation and stipends, and then for voir dire. After arriving at 8:30, it was nearly noon before they announced that several of that morning's cases had settled and they would only need one more group of jurors. They read out those numbers, then told the rest of us that our service was fulfilled and we were dismissed. So I walked through the flowering courtyard back to my car and was home around 1 -- just in time to boot my computer and see a headline about a fire at Notre Dame in Paris. I turned on the TV just as it became obvious that a huge part of the cathedral was going to be destroyed, and thought I'd probably be less depressed on a jury.

Paul and I were both pretty exhausted by dinnertime after having been awoken by the cat barf and subsequent cleanup, so we decided to order in pizza for dinner with one of the tax day coupons. We watched Legends of Tomorrow's Jane Austen Bollywood episode, which apart from some cultural appropriation was really awesome -- boys kissing, a Bechdel fail acknowledged as such, Avengers jokes, Dashwood jokes, quite good singing for a TV musical number. Then we caught up on Sunday's Billions (postponed for Les Mis; Axe is still such a dick) and watched the flashback The Enemy Within (oh, come on, Erica). I'm wishing for the best for Paris and its people; here are some photos of the inside and outside of Notre Dame from our 2015 trip: 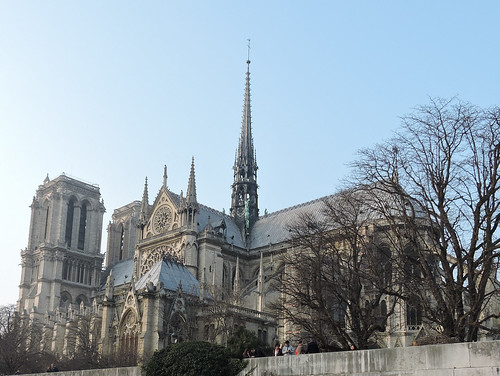