I slept late Tuesday, in part because I was really tired and in part because I had several cats decide I made a good heating blanket when the temperature dropped below 70. So apart from things that had to get done, it was not an eventful day. I did take a long walk because the weather was so nice and we're moving from daffodil and magnolia season into tulip and dogwood season, with azaleas just about to arrive.

apaulled made Boston food for dinner belatedly for Patriots' Day (baked beans, brown bread, veggie chowder). Afterward we watched this week's episodes of The Flash (we should've known that about Nora before, writers) and Fosse/Verdon (more about her career, less about her love life, writers) around the remainder of this season's The Tick (all pretty awesome). Spring color from Brookside on Sunday: 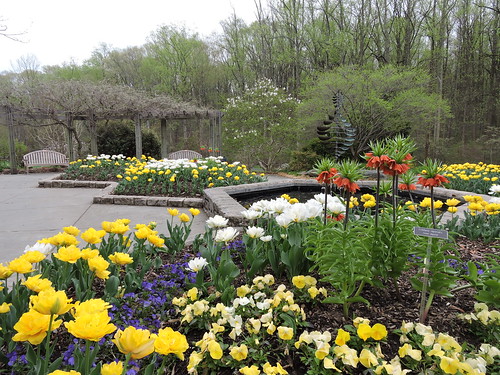