It was a kind of chaotic Wednesday. Paul worked from home because the restoration company our insurance is sending to rebuild the upstairs bedroom closet finally came to make sure the ceiling is dry post-roof repair, but they did not call before arriving as we were told they would, so I didn't get into the shower until they left around noon. Meanwhile, I had lunch plans with Alice, but her son wasn't feeling well, so she took him to get a strep test instead.

Paul and I went for a walk in the park in the afternoon since it was a gorgeous day, though we are worried because Daisy has been out of sorts all day beyond being annoyed about the machines upstairs and is acting like her ear is bothering her, so I need to call the vet tomorrow if this keeps up. She did not finish her own food, let alone try to steal anyone else's, which is very unlike her, and she slept mostly on the floor instead of one of the couches.

After dinner -- lasagna in a bag, a trial run for traveling -- we watched the 2008 remake of The 39 Steps, mostly for the cast, then we watched this week's What We Do in the Shadows, which gets more fun every week. Brookside Gardens currently has an exhibit on plastic trash by artist Keira Hart-Mendoza in collaboration with Margie Jervis, including a plastic Marie Antoinette and a representation of the plastics polluting our rivers and oceans using a Brookside fountain: 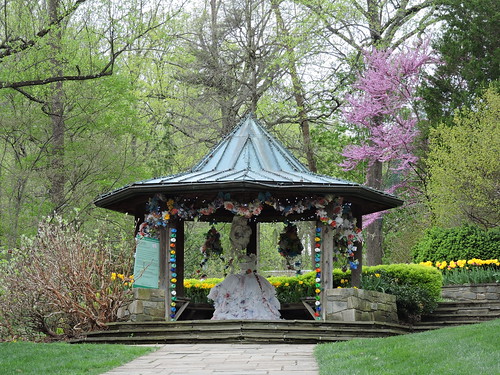