We had a super, super-busy Saturday starting right after breakfast when we headed out to Gaithersburg, followed by a visit to Bethesda and Garrett Park before we went downtown for the evening for dinner and to see the Clintons! Here is our day in photos: 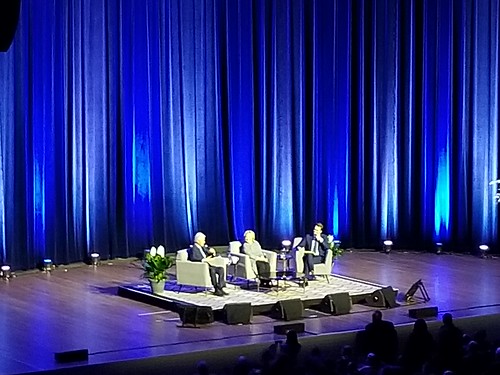 We did not know that Klepper was going to be hosting the event with the Clintons, which was a nice surprise -- we've always liked him on Comedy Central. We knew nothing about the format of the show before we got there along with a very enthusiastic, partisan audience who laughed and clapped heartily. The Clintons had an obviously prepared spiel with photos about the philanthropy work done by their foundation, but they were quite entertaining talking off the cuff about the past and upcoming elections.

Hillary, no surprise, is very sharp, on target, sarcastic humor, diplomatic talking about current candidates but stressing the need for clear, practical policy; Bill clearly loves sound of own voice but he's also quite funny, very proud of Hillary and also of Obama (outraged that Hillary was accused of playing loose with secrets when Obama had been surprised she hadn't told Bill about the Osama Bin Laden raid). The line that got the most laughs was when he was encouraging people to remember what we all have in common as humans even at the genetic level, when he said that Hillary was not at all surprised to learn he had Neanderthal in him.

Will write more about everything tomorrow but we're going to see Avengers: Endgame in the afternoon so I need to get to bed!
Collapse