I got a bit more done out of the house on Tuesday than I managed on Monday but I am still behind on everything, in part because the "afternoon rain" did not arrive until 8 p.m. so it was a magnificent afternoon to be outdoors. I had a very successful trip to Michael's, where all the beads are 40-70% off, and a very unsuccessful trip to Home Depot, which not only didn't have the little stick-on shelves I wanted but did have half its parking lot blocked, resulting in even more obnoxious stop-sign-running pedestrian-disrespecting drivers honking and nearly hitting each other all over the place. I also went to three Groudon raids around the park with friends from my group. When Paul got home, since it was still not raining, we went to McCrillis Garden to see the azaleas, which are peaking all around the area.

We had veggie cheesesteaks for dinner, then we watched The Flash, which is once again dragging out a storyline too long, and the season premiere of The 100, which is a lot like the series premiere in its structure and has not yet killed off any of the characters I really care about, so we'll see how this season goes. Then we watched Fosse/Verdon, which this week is about the slow disintegration of their relationship while he's directing Pippin -- a show that has been part of my life since I was very young, whose songs I learned in their entirety at theater camp. The episode parallels the events of the musical with the events of Fosse's life, and it is both extraordinary and devastating; not sure I will ever watch the musical the same way again. Here are some photos from the aforementioned walk at McCrillis Garden: 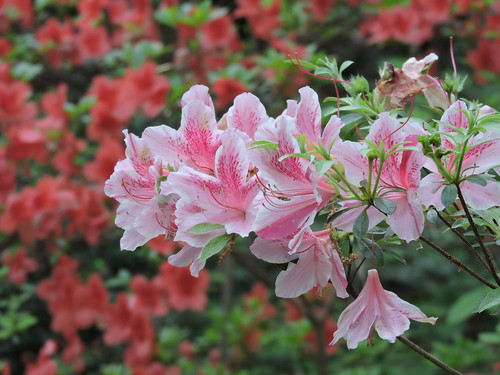