We had ambitious plans for Sunday -- we were going to go to the Maryland Sheep and Wool Festival, then to my in-laws' for an early dinner, and we were going to do this despite the rain that fell all night and all morning -- but once again we could hear dripping behind one of the bedroom walls, and when we checked the attic, there was water collecting beneath the brand new many-thousand-dollar roof. So instead we spent the morning firing off furious emails and social media comments to the roofers, since they don't have any sort of emergency numbers, eventually attracting their attention so they could send someone out with a ladder by 3 p.m.

Turns out they apparently cracked one of the pipes connected to the air conditioning system while installing the roof, and the crack was letting the water in. So they put up a tarp and they're coming to replace the pipe tomorrow. Since the whole day was gone by the time they left, we went out for a few minutes for provisions, then came home, ate leftover tacos for Cinco de Mayo, and watched Supergirl (come out to Lena already!), Les Miserables (this Javert is even more homoerotic than in the Brick), and Last Week Tonight (in which John Oliver lambasts lethal injection). These were the happiest members of our household today: 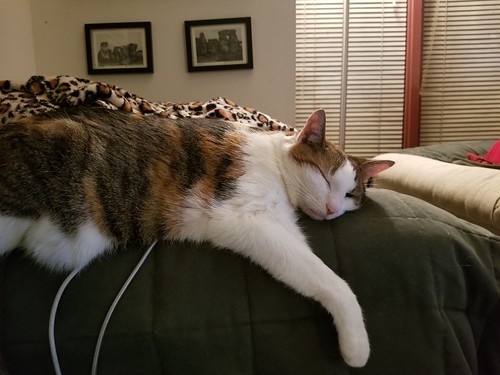