On Monday we had to wait all morning for the roofing company to find the right size pipe to replace the one they apparently cracked when installing the roof, but eventually they appeared with tall ladders, got up on the roof, and hopefully fixed the leak once and for all, though we won't be certain until we get another hard rainstorm. I spent all day in the house waiting for them to finish, then when Paul got home from a post-work late-afternoon dentist appointment, we went to the food store.

Somehow despite being stuck in the house all day I was sluggish and got little done, so although we watched Legends of Tomorrow, I am a bit confused about the whole hell/demonic possession storyline because I was trying to catch up on email. Then we watched the awesome new Discovery of Witches with the awesome Lindsay Duncan, followed by The Enemy Within, which is playing coy about whose side Erica is really on. From Washingtonian Lake the weekend before last, goslings and their parents: 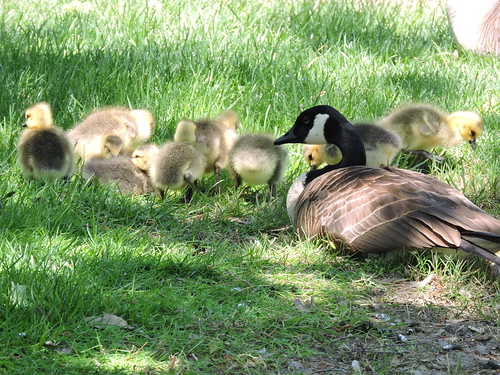