My Thursday involved a lot of boring medical stuff, since I had to get one test done and my doctor had the results of my blood work from last week -- she wasn't happy with my blood sugar, which would be less of an issue if I didn't have diabetes in my extended family, and I'm at the point where I'm balancing two friends who've had catastrophic health problems from weight loss surgery against the many who are on Facebook bragging about how much weight they have lost after surgery with casual effort, since the two times in my life I've lost significant weight, I had to eat under 900 calories a day for weeks no matter how much I was exercising, and that's just not sustainable especially now that I don't eat meat.

Otherwise I had a couple of shopping stops to make, some pet arrangements to work on for when we travel this summer, and a bunch of boring chores. We watched Cloak & Dagger, which I almost turned off during one scene because the kidnapped girls storyline was pushing my this-is-getting-exploitative-for-television buttons in a way that really pisses me off, and if they hadn't mostly wrapped that storyline up, I'm not sure I'd keep watching the show. Then we watched some of the Rock and Roll Hall of Fame induction ceremony and performances. Here are some photos from a couple of weeks ago of the azaleas around Garrett Park, the former railroad town now famous for being an arboretum community: 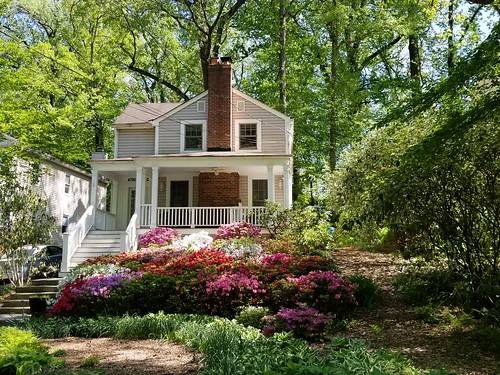