The repair company arrived bright and early to touch up the paint and check the closet door track, so I am cautiously optimistic that the major repairs are finished in the upstairs bedroom and we can put it back together before older son arrives next week! After lunch, we went to Great Falls, where the goslings and many turtles had apparently moved upstream by the canal because of repair work, but there were ducklings right by the visitor center and a big cranky-looking snapper near the canal construction, plus herons flying over the very high water of the river: 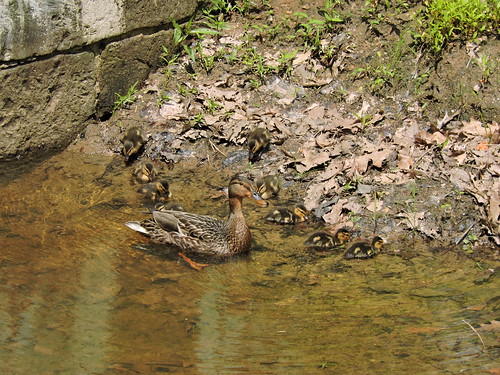 We stopped at the Bethesda Co-op on the way home. Paul wanted to watch the Preakness, so even though I keep saying I am never looking at horse racing again, I saw the race and worried a lot about the horse that threw its rider at the start getting involved in an accident. (One of the fillies died at Pimlico yesterday and the sport really needs to stop.) It's fitting that the horse nearly bumped by the disqualified Derby winner ended up winning. We watched the Nationals game, then the rerun of last season's SNL finale before this season's started.
Collapse