Brace yourselves for no poems for a few days! We have had a very busy Friday that started with getting up at the crack of dawn because the plumber was coming to replace the kitchen faucet, which stopped working yesterday right before we left for graduation. They were nice enough to fit us in, and I had the brainstorm to get a replacement faucet for the upstairs hall bathroom and ask whether they could replace that too since the hot water handle (probably original to the house decades ago) had stopped working completely. So now when Daniel and Adam get home, they will have working water in the right places and hopefully no water leaking anywhere -- if the roof survived yesterday's storm, I figure it must finally be fixed!

I spent the rest of the morning cleaning up Daniel's room post-closet rebuild, which entailed a lot of sorting of magazines he needs to tell us whether he wants to ship to Seattle or recycle. Then we cooked some samosas, grabbed a few graduation presents, and met Adam at the home of Katherine's college roommate and her family for a party. I only knew Katherine's parents and brother there, but we met several other parents and university professors who were lovely, and we watched kids play badminton, ate lots of excellent cheese and cake, and nearly had our food stolen by an adorable dog named Neo. Now I'm exhausted again, but Flickr is working after its server move and I can organize graduation pics! 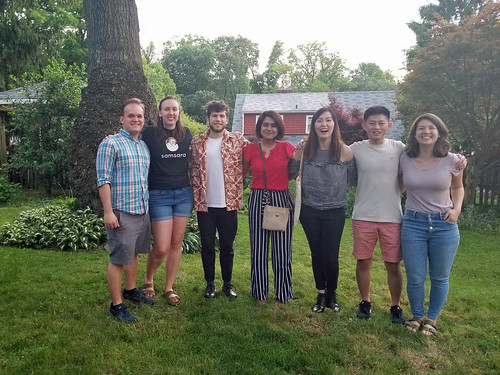