After disembarking -- first time I think I've ever walked down a staircase onto the runway and been taken by bus to the terminal -- we had a fast trip through customs, got our luggage and rental car, and went to Viking World, which in addition to being a museum of regional Viking history (it covers Viking activity in North America as well as Europe) has a big breakfast buffet with lots of local fish that I did not eat and cheeses, skyr, fruit, muesli, and bread that I did! The museum has a full size replica Viking ship suspended from the upper level over the lower one, plus a farm with local animals including lambs, goat kids, chicks, and a friendly cat.

From there we got lost a bit in Raudholar before getting ourselves into Reykjavik proper, where we parked and walked past lots of souvenir and tourist shops (this is a great place for gratuitous Thor and Loki collectibles) to the Icelandic Phallological Museum, which is, you guessed it, a museum about penises, mostly impressive animal specimens but also a lot of art and some photos of human, um, exceptionalism. After that it only made sense to have lunch at Cafe Loki, which is across the street from Reykjavik's massive Hallgrimskirkja Church, currently under renovation. The cafe's rye bread ice cream is amazing, as is the church's pipe organ.

Then we walked down to the old harbor, where we watched some fish swim and saw a mink haul a fish practically its own size into a hiding place in the rocks, before boarding a boat with about 30 other people to visit the islands of Akurey and Lundey, which are covered at this time of year not only with puffins but with seagulls, arctic terns, and some kind of geese that had goslings! That was truly amazing and we only got slightly drenched! We thought about visiting another museum but were pretty fried from not-sleeping on the plane, so we stopped at a grocery store to pick up more skyr and other food and ate at our AirBnB in a pretty suburban neighborhood! 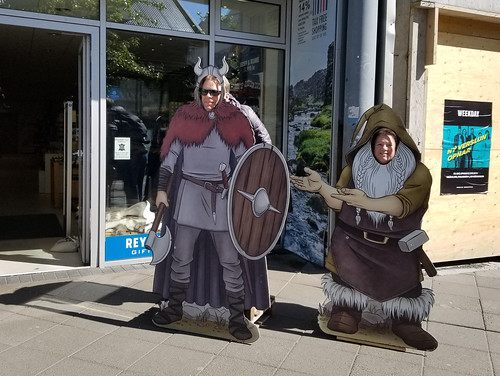