On Wednesday we spent nearly all day on the Silver Circle in southwestern Iceland, which is reached by driving through a very long tunnel under a fjord. We went first to Borgarnes, a pretty town on the water, where we stopped in Geirabakari Kaffihus (which stood in for Papa John's in The Secret Life of Walter Mitty and has excellent chocolate cinnamon rolls). Then we drove to nearby Skallagrimsgarour and Hildartunshusin, a burial mound and replica sod houses in the town. From there we headed into the wilderness to Glanni Waterfall and Grabrok crater -- plus a visit to Bifrost University strictly to take photos by the sign. After that, we hiked to two waterfall areas, the spectacular Hraunfossar and Barnafoss, where we also had a picnic. From there we headed to Snorralaug, believed to be the oldest hot spring used by people in Iceland, and Deildartunguhver, the hottest hot springs in Europe. Our last stop was Trollagarourinn, a park with statues and information about trolls and many troll-related activities, including Surtur's involvement with them, before we headed back for dinner! In photos: 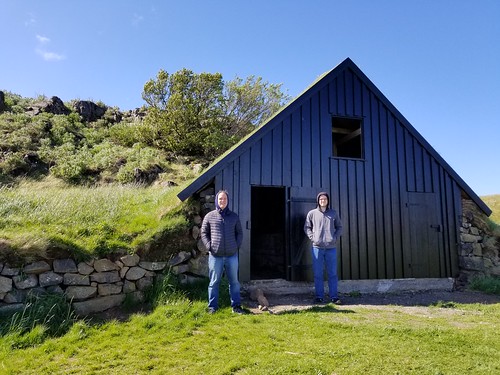