I have survived the MVA and persuaded the state of Maryland that, in fact, I am a legal resident. It is not easy these days to find multiple printed proofs of my address apart from my driver's license and passport, which don't count for that part of the Real ID documentation; we don't get snail mail credit card or bank statements or gas bills or income tax forms, so I guess it's a good thing that I can only get Shutterfly coupons from Kohl's by getting a paper charge statement, particularly since our stupid car insurance only has Paul's name on the little cards in the vehicles even though my name is on both vehicle titles.

I did a bunch of shopping chores, walked a bit in the park, saw my mom briefly, and finished up some online work the rest of the day, and watched both last week's and this week's Elementary bracketing the third episode of Good Omens, in which we see Crowley and Aziraphale at important historical moments (it seems wrong to be laughing through the Crucifixion and the creation of Hamlet, but I can't help it). Speaking of historical tourism, here are some pics from Viking World in Iceland, including a recreation of a boat funeral that was clearly an inspiration for Boromir's in The Fellowship of the Ring: 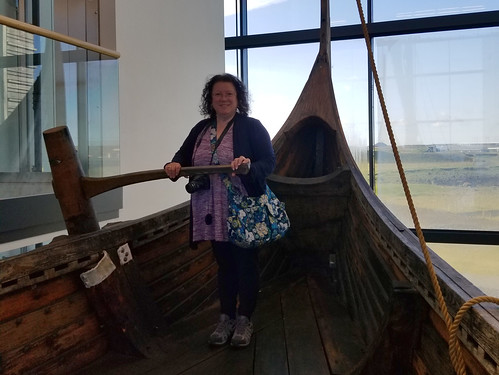