After a quiet morning of ongoing attempts to get things in order after our trip, we went downtown around noon to the National Gallery of Art to see The American Pre-Raphaelites: Radical Realists and Tintoretto: Artist of Renaissance Venice, both of which were stunning, though I need a refresher in how the American Pre-Raphaelites separated themselves from the Hudson River School, given that they painted in many of the same areas and their disinterest in allegory actually seems less Pre-Raphaelite than, say, Rossetti and Morris. I knew nothing about Tintoretto so his huge, dramatic canvases were very enjoyable and in several cases quite funny (Mars hiding under the table from Vulcan).

It was a Pokemon community day, so I sat for a while in one of the galleries between three Pokestops catching shiny Slakoth and we walked in the sculpture garden where I didn't actually run into anyone I knew but their names were on the lures on the Pokestops. On the way home we stopped at Giant, and we just spent the evening catching up on Billions, all terrible people, and Cloak and Dagger, a nice ending to a violent season. Here are Tintoretto's Abduction of Helen, Last Supper, and Venus and Mars Surprised by Vulcan, plus Hill's paintings of Natural Bridge and his family home in West Nyack, as well as Hennessy's and Farrer's women of the Civil War and flowers by Fidelia Bridges. 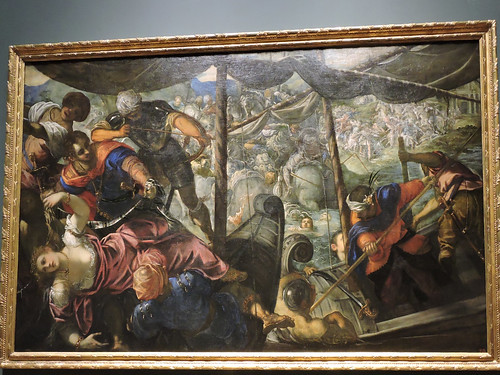