Somehow I scheduled two major appointments for Wednesday -- my annual gynecological checkup in the morning, my semiannual dentist appointment in the afternoon -- so I was mostly out running around while Paul was working from home so the washing machine repairman could come. So it was a day of not-fun (and expensive) necessities, but most of my parts and the washing machine appear to be working again, so that's all good. We even went out for ice cream in the early evening just because.

After dinner (Hungarian goulash made by Paul), we watched the season finale of Billions, in which lots of terrible people all remember they're too selfish to form meaningful alliances, followed by two of the three Blindspot episodes we'd missed, in which a couple of terrible people may be ruining the country. Here is Iceland's gorgeous Urridafoss, a waterfall that vaguely resembles the Great Falls of the Potomac until you get to the gorge and the rainbows! 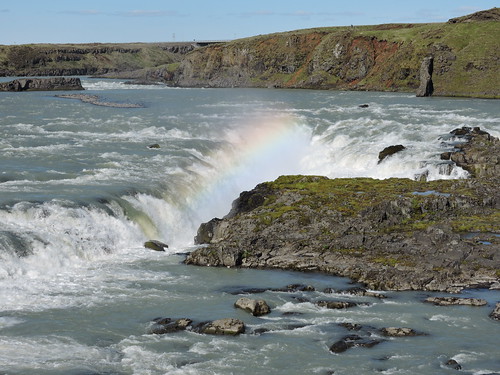