I had to go back to the doctor on Wednesday to make sure my blood sugar and liver enzymes were behaving, which apparently they are, which she knew from my blood tests last week. The whole office is always overbooked and running late, but they were running insanely late and after waiting an hour for my 4:30 appointment, I wasn't out of there till after 6. So the part of my day before that, which I think was fine, is a blur -- all I know is that I went to a Kyogre raid, because my baby account has one now.

We spent the evening binge watching the 1981 television version of The Hitchhiker's Guide to the Galaxy, which I enjoyed a lot though I found that there were things I missed from the not-great film (and I don't just mean Alan Rickman and Bill Nighy; Trillian has a more substantial role in the movie and the insane bits with Humma Kavula are unforgettable, plus I kind of like the happy ending). I found some pics I never posted from Artechouse's In Peak Bloom exhibit from before we went to Iceland: 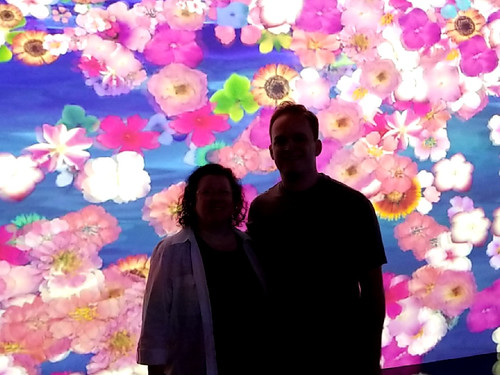