I had lunch plans Thursday with a bunch of friends, but one of them was sick, so we postponed till next week, which is just as well because I'm still fried from dealing with the doctor yesterday though I'm sorry my friend has a miserable summer cold. And younger son is home tomorrow night! So my day was pretty quiet apart from one Kyogre raid after a long walk in the park, where it was not too hot in the shade. I even saw a bunny.

I have downloaded the new Harry Potter game, but I doubt I'll be playing it much since you can only replenish spell energy when you're right near the game's equivalent of Pokestops. We saw most of the Nationals-Phillies game before watching Elementary, which I fear from the name of the villain is going to wrap the season and thus the series in a bad place for Sherlock! Here are some views of Iceland's gorgeous Gullfoss: 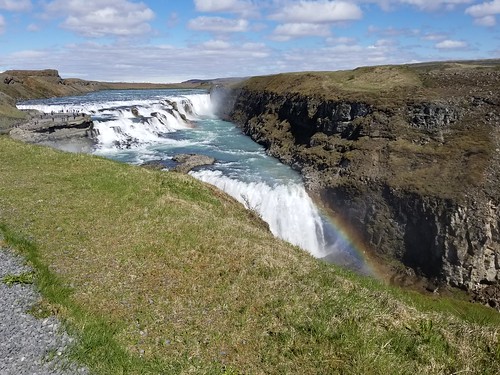