Monday was my 29th wedding anniversary, though Paul and I had lots of extended family events so we didn't do any big romantic activities. Adam and Katherine landed from their overnight flight from San Francisco at an insanely early hour, went to College Park to sleep for a while, then met me at Starbucks for an EX raid (Adam caught me Deoxys but Katherine's, sadly, ran). Afterward we went to Goldberg's for bagels before Adam drove Katherine to the Metro and I came home to get some photos sorted.

When Paul got home, we met my parents at Not Your Average Joe's, where they took us out to dinner and talked to Adam about his trip. (He and Katherine believe they have found an apartment, though until their deposit has been accepted and contract signed, I'm not sure how official it is.) We watched the first episode of The Loudest Voice, the Russell-Crowe-as-Roger-Ailes series, in which Russell is good enough to creep me out to an extreme, then we Skyped Daniel with some help from cats: 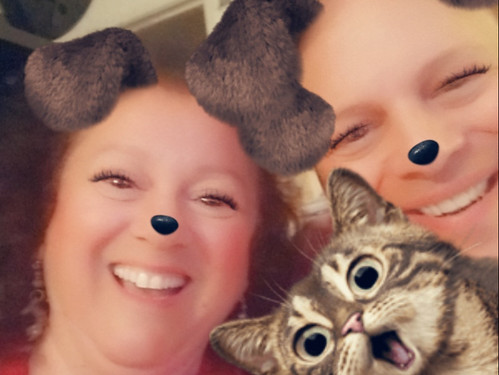