I had an un-thrilling day with an eye doctor appointment smack in the middle of it, which was okay as eye doctor appointments go but I discovered that they don't take our new insurance so the optometrist practice selling eye glasses connected to the office is now way out of my price range, so I need to find out who DOES take our new insurance before I get new glasses, which is a pain!

Adam is still waiting for the contract for his new apartment, so he did some chores and Paul got sent home after lunch because his office closed early for the Fourth of July. We watched some soccer together and I went out for raid hour to catch some Groudons with my local group before dinner and Logan Lucky, which has a great cast and is very funny and surprisingly heartwarming.

We are not going anywhere near DC and inflating Trump's crowd numbers in any way; instead we're going to Baltimore to the zoo and aquarium before the Inner Harbor fireworks. I took my Viking goddess from Brigid's Grove to Iceland with me to take pictures of her at waterfalls and troll gardens, so here are some of those, including one from the plane flying over snowy Greenland: 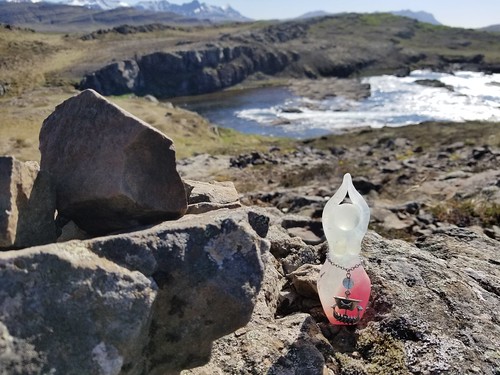