We had ambitious July 4th plans, some of which got set aside because of thunderstorms, but it was still a really good day although we did absolutely nothing patriotic besides watch some of the Dodgers-Padres game that's still going -- no way was I going downtown or even watching A Capitol Fourth and ruining my holiday thinking about the thing in the White House. Instead I had brunch with four friends from high school, two of whom I have hardly seen since early in college and another I primarily talk to on Facebook who was in town from California. It was so nice to see them all and catch up on their lives and families.

Then I went with my family to the Maryland Zoo in Baltimore, primarily so that Adam could visit their penguins once more before he moves out west. We used to do Breakfast with the Penguins and their various penguin tours at least once a year for his birthday, so this time we did the new Penguin Encounter in their new, much larger penguin facility. We got to meet all the ambassador penguins, and unlike before where we were lucky if we got to pet one penguin, we were allowed to pet any penguin who approached. I had one in my lap, another chewing on my purse strap, and another untying my shoe all at once!

We visited much of the zoo before the rain that had been falling all afternoon turned into a serious thunderstorm. We'd been thinking about going to the aquarium and staying in the Inner Harbor for the fireworks, but it was close to closing time and Paul didn't want to walk around in the rain for another four hours, so instead we came home and watched the over-the-top Skyscraper, which mashes up Die Hard, The Towering Inferno, several Asian action movies, and several other films with The Rock. Here are some pics from the penguin encounter, plus one from penguin feeding time at the much larger breeding facility: 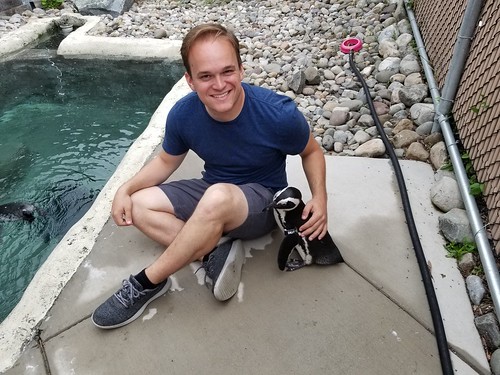