I got taken out for Indian food because Adam did not need to go to the dump. Well, originally Adam thought he DID need to go to the dump to get rid of his ripped inflatable kayak, but it turned out that it fit in our trash can, but we'd already told Paul that we were going to the dump and he pointed out that it was right near Minerva, so we picked him up anyway and went to the buffet for lunch. Then we came home and sorted things, and I went out to do a very successful Armored Mewtwo raid.

We tried to get Adam's car title out of the box at the bank, only to discover it wasn't there. But we had a coupon for California Tortilla and realized that due to our busy weekend schedule and Adam's busy daytime schedule, this might be his last chance to eat there, so we got burritos for dinner. We came home and watched Dune, which despite Patrick Stewart, Brad Dourif, and several other fine actors was far more atrocious than I had remembered; I prefer Jupiter Ascending! Here are some photos of Barnafoss in Iceland: 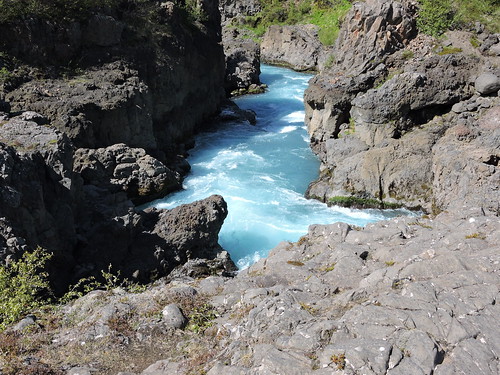