We had a nice day Saturday though we were out almost the whole day, starting by driving to Thurmont to meet Paul's parents for lunch at Simply Asia so they could see Adam before he moves to San Francisco. We sent them home with our leftovers because we were headed from there to Baltimore to see the Orioles play, though we started by going to Denise's house because she also had a ticket to the game and said we could park in her neighborhood, since a sinkhole had closed some of the lots around the stadium after last week's floods.

We hung out at her place for a bit waiting for the first half of the double-header to end, then we all walked to the stadium, which had Dimitrius Graham performing on the roof deck before the game and we all got free Hawaiian Orioles shirts! Unfortunately the Orioles lost 12-4, though we left before the final runs to walk back to get our car at Denise's. When we got home, we had ice cream and watched Men in Black 3 -- why exactly do people think the new MIB is overstuffed compared to 2 and 3? Anyway, here are some photos from the game and lunch earlier: 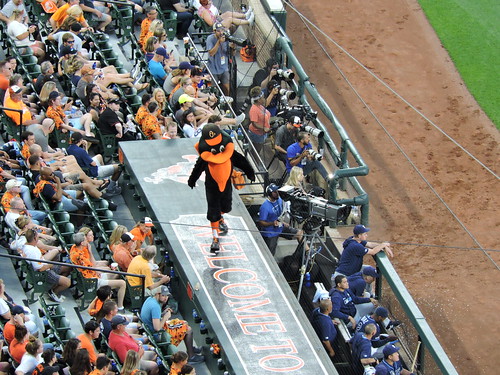