Adam was out nearly the entire day on Sunday, going kayaking and out to lunch with friends, then picking up Katherine from the Metro and going to College Park to pack, so we had a morning of Wimbledon, then we went to Kenilworth Aquatic Gardens for their annual Lotus and Water Lily Festival. It was quite hot and the flowers were a bit past peak, but it was gorgeous -- lots of enormous pink blooms in the lotus ponds and a few frogs and turtles in among the water lilies. We also walked out the boardwalk into the wetlands, where there were egrets, red-shouldered hawks, and butterflies on the marsh flowers. We didn't stay for much of the crafts and music, though we did hear some of the African and Mexican music and I got to hold a python! 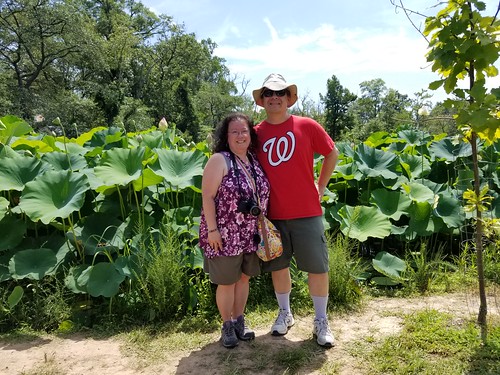 We didn't have dinner till after 8 p.m. when Adam and Katherine arrived for burrito casserole. Then, after much discussion, we ended up watching Rogue One because she had never seen it, and afterward, because of running commentary by certain members of the family during the film, we watched the first Robot Chicken Star Wars special, which holds up about as well as the Star Wars movies themselves! Tomorrow I'm stuck in the house part of the day because Adam's car is having battery issues and it's not worth the cost to replace when he's getting rid of the car, then I'm helping him ship stuff the part of the day he doesn't have my van in College Park, so hopefully I will at least get the laundry done and my hair dyed!
Collapse