Spent the whole day getting ready to move Adam to San Francisco -- packing, taking boxes to UPS, going to his apartment in College Park after dropping Katherine off at HER apartment in College Park so they both could clean up and leave their keys, disassembling his bed, driving that and his bike home, taking apart the bunk beds that have been in his room since he was a small child, reassembling the bed from College Park, laundering and replacing the linens, putting the bunk bed pieces in Daniel's closet, having pizza with Katherine and her father who had come to retrieve her and the things she decided not to ship from her College Park apartment, helping Adam give his car to someone I know from Pokemon, and then finally packing my own things for San Francisco while he was out with his high school best friends. I definitely remembered my computer but I'm not sure I have enough underwear! Just a few snapshots from the day in reverse order: 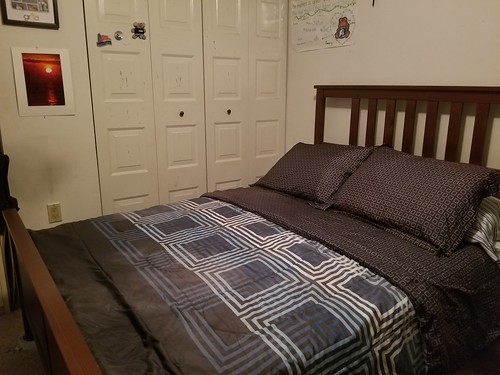 We had a very full day -- got up at 5, mostly slept on the plane though we ate breakfast and watched the terrible, terrible Holmes and Watson, picked up the rental car, had a fabulous Indian food at Noori in San Bruno, stopped at Target and Lowe's to get some things Adam needed for his apartment, drove into the city, met his landlady at the big fountain near the pool in the apartment complex, left suitcases and hampers and stuff (and I did a Pokemon raid at the adjacent gym), met Daniel -- who has been in the city for a few days already -- downstairs, walked to Salt and Straw for ice cream which we ate at Patricia's Green, eventually dropped Daniel at his downtown hotel and took Adam to stay with us out at the Villa Montes Hotel in San Bruno. It's all been lovely and the weather has been incredible, about 70 degrees and almost no clouds! 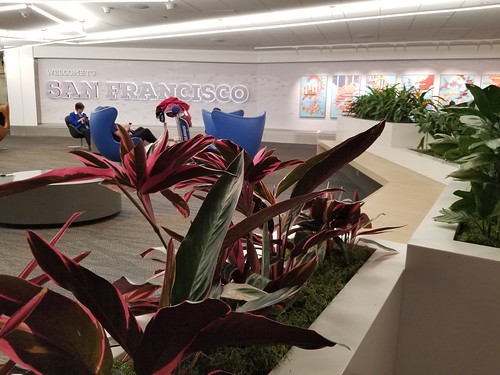