After breakfast at the hotel buffet, we spent Thursday morning shopping in the suburbs with Adam for things for his apartment while Daniel went to the contemporary art museum downtown. We went to Home Depot to pick up rugs Adam and Katherine had found online, then drove across the bay to Oakland to go to Ikea for furniture. Then we met Daniel outside the museum and stopped at the very good House of Bagels on the way to Lands End in the Golden Gate National Recreation Area, which has great views of the Golden Gate Bridge (when not covered by the fog that rolled in) and a labyrinth on a promontory by the water. There's a cave, the rocks offshore are covered in pelicans and cormorants, and we saw hummingbirds, baby gulls, even a skunk!

We visited the beach on the Pacific Ocean past Lands End on the way to Golden Gate Park, where there were more gulls and pelicans, some people fishing, a few brave souls surfing, and though it was too chilly for me to wade out to catch sand crabs, we saw evidence of them all over the beach. Later we went to see the windmill and bison in the lower part of the park. Being near the water made me crave hush puppies, so we did research and discovered a restaurant in the Tenderloin called Brenda's French Soul Food which has phenomenal vegetarian (and not) Creole cuisine and chocolate-filled beignets! After eating, we dropped Daniel off at his hotel, stopped at Target for apartment stuff, and went to pick up Katherine from the airport. 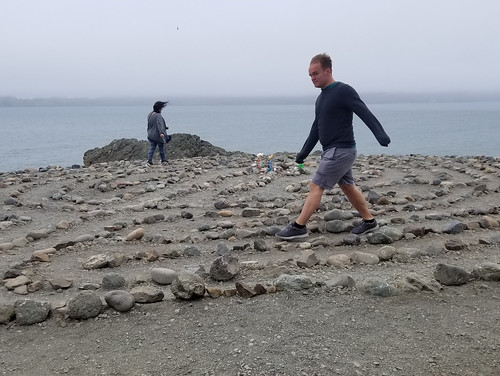 We spent most of Friday at Adam and Katherine's new apartment, first waiting for furniture to be delivered from IKEA, then putting together the kitchen table and chairs plus a big living room chair while waiting for Macy's to get there with the bed. We ate bagels we'd bought at House of Bagels the day before plus some snacks picked up at a CVS down the street, where we also stopped for some household essentials. Daniel joined us and brought us Mrs. Fields' cookies after lunch. When finally the bed had linens on it, we went out.

We headed down to Fisherman's Wharf, walking out on Pier 39 to see the many sea lions sunning themselves among the gulls, pelicans, and cormorants. Then we went to Boudin Bakery for wonderful sourdough bread bowls with soup and half sandwiches with cheese, after which we walked along the waterfront in view of Alcatraz to the Musee Mecanique, which Daniel had discovered -- an antique penny arcade with all manner of historic amusements from fortunetelling machines to musical monkey devices, where we competed at air hockey and skee ball! 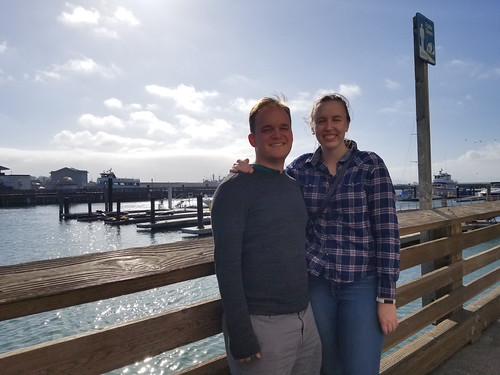