Saturday was Adam's 23rd birthday as well as the 50th anniversary of the moon landing, so we spent most of the day celebrating. We drove into the city to meet Adam and Katherine, walked a few blocks through the Civic Center area, and took a Muni train to Oracle Park, where we met Daniel for the Giants-Mets game. After getting lucky in extra innings the past two days, the Giants were not as successful today (which was okay with most of us since we're primarily fans of other teams). But the weather was magnificent, we had fabulous seats high above first base with amazing views of the ships in the bay and the pigeons and seagulls who visit the stadium, and we had Impossible Burgers, cotton candy, and lots of food. 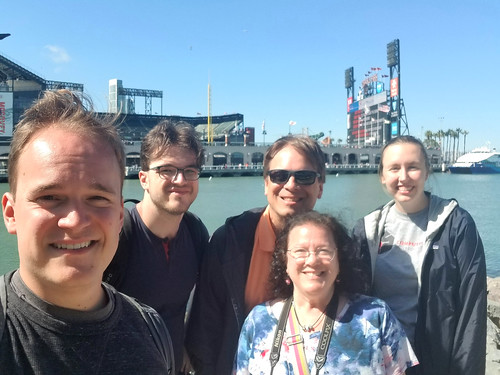 After the game ended, we walked around the stadium to see the baseball statues and the sailboats, then we took the train back to Civic Center and walked around City Hall and the theaters before hanging out at Adam's apartment for a while. Katherine and I played a bit of Pokemon and we watched some moon landing retrospectives, which the stadium had on screens as well. We considered many restaurants before deciding to go to Rangoon Ruby for Burmese food (I don't think I've ever had Burmese curry before and it was delicious, plus pumpkin stew). Adam wanted Salt and Straw for his birthday dessert, so we walked there and sat in Patricia's Green eating it before walking him back to his apartment and dropping Daniel off at his hotel.
Collapse