Paul and I spent most of Monday traveling from San Francisco to our house, starting with a very early breakfast in our hotel, then a drive to the airport and train ride from the rental car return to the terminal. We had free United Club passes from our frequent flyer miles, so we had soft drinks there for an hour and I did a Scyther raid with strangers I couldn't see. We had a fairly easy flight until we hit the storms just leaving DC, during which we ate hummus and cream cheese and watched Stan & Ollie, which was less depressing than I expected. Our cats were so well fed by our catsitter that they were more interested in our luggage than in us. We watched one episode of Blood and Treasure while catching up on email and uploading photos, so here are some from the Civic Center neighborhood of San Francisco: 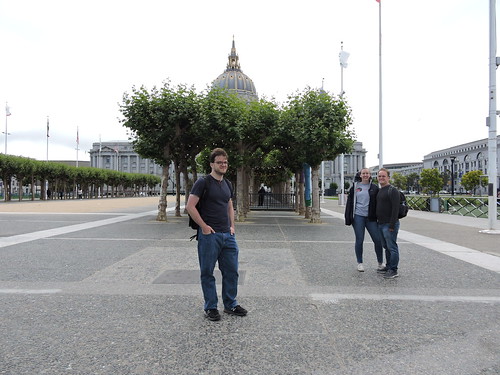