I STILL have no vehicle, though Paul worked from home so we could go pick up the car in the afternoon. So once again I was boring, though I will report that all post-trip laundries are now folded and Adam's room is clean as long as you don't open the closets or look in the bins under the bed. I could only take so much of Mueller's testimony, so while I was folding the laundry I watched The Brothers Bloom, which was sadder than I expected but very well acted.

We went out to Giant for cat food (and I did two Mewtwo raids during the weekly raid hour), then we came home and had veggie sloppy joe's for dinner. Afterward we caught up on the Elementary and Agents of SHIELD episodes that we missed while we were in San Francisco, which I miss a lot now that the heat and humidity are climbing again. Here are some of the penguins from the San Francisco Zoo, where we got to watch them being fed and singing to each other: 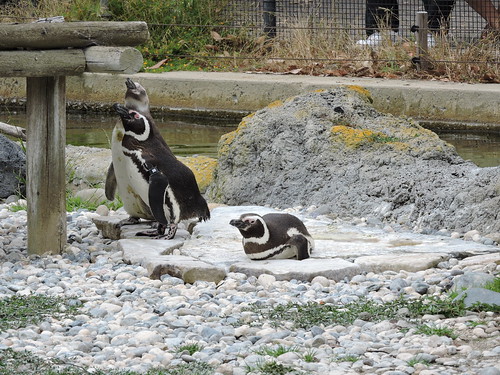