Quickie, been spending the evening at the Vudu Viewing Party for Avengers: Endgame, which Marvel was very silly to schedule against the season finale of Agents of SHIELD, which we watched when we got back here from dinner with my parents. I had a pretty good Friday: picked up my new glasses, which I'm still getting used to but I like the sunglasses clip, then went to Michael's (which has shoe charms and bling charms but no book charms) and Bed, Bath & Beyond (which is overcharging for mattress covers so much I am going to get one from Amazon) before stopping for lebneh at Lebanese Taverna in its new spot in Congressional. On the way home I stopped to do a couple of Rayquaza raids and caught two shiny ones! Plus we watched an old episode of American Masters about Hal Prince, so I got to see some Evita and lots of Sondheim. There are just a couple of goofy pics I took to tweet for the viewing party online and one of Effie being possessive of my purse: 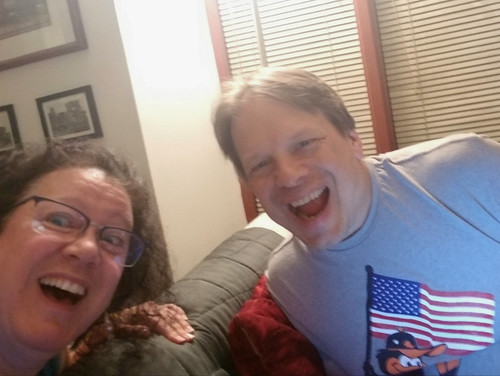