I had a fairly quiet early Monday -- writing stuff, trip laundry, cat laundry, kitchen cleanup -- then in the late afternoon I took a walk, then a shower, then Paul and I went to meet friends from my local Pokemon raiding group for dinner at the Cheesecake Factory, where the wife of one of the players and two others with whom I'm friendly (one of whom is a writer and editor whom I've known for years because of Star Trek) has planned a surprise birthday party.

I ate way too much, since we were all encouraged to have cheesecake, but it was very fun to see everyone not at a raid. When we got home we watched the end of the Orioles game (boooo) and the start of the Nationals game (yay, I think). I have nothing to say about the news better than the people swearing in rage. From Lewis Ginter Botanical Garden, some of the half-million bricks from the Nature Connects: Art with LEGO Bricks display by artist Sean Kenney: 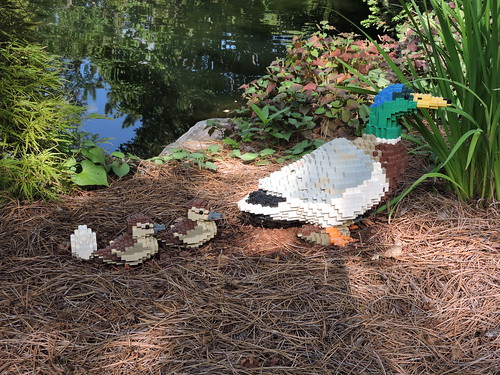