We spent most of Saturday in Baltimore with Paul's parents plus his brother Jon, wife Brooke, and their twins, which was very nice since we haven't seen them in a couple of years. We met at the Indian buffet Kumari, which is down the street from the Baltimore Museum of Industry, which I'd never visited before and really enjoyed -- I had no idea Head tennis rackets were from Baltimore, nor the linotype machine, and they had a blacksmith working and Congresswoman Helen Delich Bentley's maritime reporting videos. Plus we got to build catapults out of popsicle sticks and spoons.

From the museum we went to the Inner Harbor, where my in-laws wanted to sit for a while, so they went to have drinks at Barnes & Noble, while my nephews did some shopping and we walked around to Harborplace with their parents (and I did a couple of Suicune raids during the three-hour event). The boys really wanted Shake Shack for dinner, so we went there, and I have now had cheese fries two weekends in a row after not having had them for years! We're seeing them all again Tuesday for dinner, so we came home afterward and watched the first episode of On Becoming a God in Central Florida. 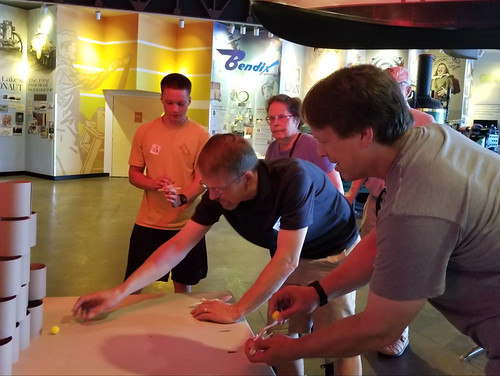