My college roommate Tracey was driving through my area on her way to the beach, so we got to spend a lot of Sunday with her. We went to Cava for lunch, then went downtown to the National Geographic Museum to see the Queens of Egypt exhibit -- which has hundreds of artifacts including perfumes, jewelry, mummies, the lid of Nefertari's sarcophagus (and what may be her knees) plus a virtual tour of her tomb -- and the permanent collection of National Geographic research and photography.

Tracey headed on south before dinner, so I went to the park to do a Pokemon raid and in the process discovered that while in DC, I had unknowingly picked up a Relicanth quest released in conjunction with the Pokemon World Championships at the convention center downtown, so I no longer need to go to New Zealand to catch one! Paul and I had sandwiches for dinner and watched this week's Succession, then some pre-season football, now Last Week Tonight. 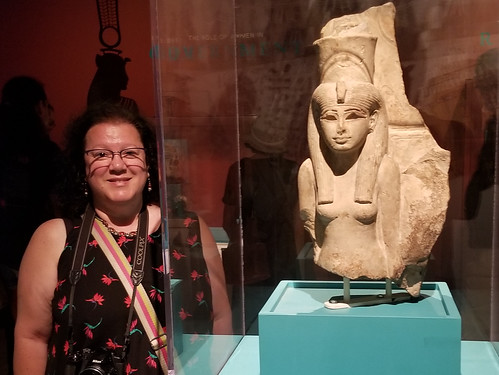