I spent most of Friday cleaning and reorganizing after going on a fruitless hunt for a working Dell laptop charger cord (we have one that's not working and two Dell laptops in the house that also are not working but we can't find their cords). Meanwhile I also hung up some photos in younger son's room (the giant foam letters spelling out his name that have been there for 20 years came down) and did a bunch of cleanup in the kitchen and hall.

It rained all day, though it was nice and cool, so I only got out for a couple of raids in the park. We had dinner with my parents, then came home and watched The Sea Hawk because we'd never seen it and discovered it was On Demand. I'm ambivalent about Errol Flynn (talk about someone who'd be boycotted if he were alive) but I love old seafaring movies. Here from last weekend are my in-laws with us at the Baltimore Museum of Industry making catapults: 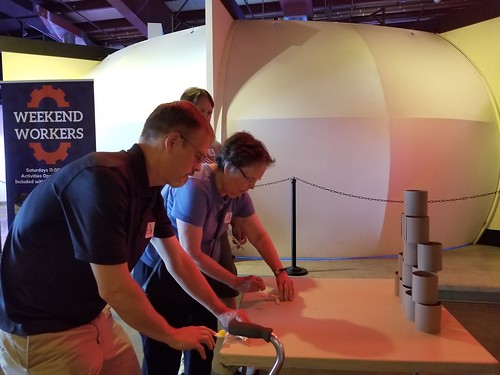