I spent most of Thursday with Denise, who arrived while I was setting up my new keyboard and snuggled Cinnamon until I was organized enough to go out. We went to Marshalls to look at their Halloween decorations and end-of-summer sale, then we stopped at Cava to pick up lunch and came back to my house, where we watched Vacation, 90% for Chris Hemsworth's fake penis and 10% for Debbie Do-Anything.

In the evening after an EX raid in the park, we met Paul, Denise's sister Dia, and two other friends at Chuy's because I had told them about the nacho bar in the model car trunk and they all wanted to try it (plus, you know, margaritas). We had a lovely long dinner, then we went our separate ways and got home in time for half of the Baltimore-Washington game, which the Ravens thankfully won. A couple of pics: 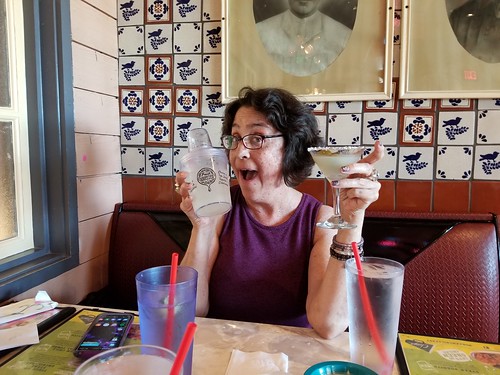